I froze in my tracks. For any experienced naturalist hiking in the Sonoran Desert, the sound of a rattlesnake elicits that reaction. I carefully surveyed my surroundings…nothing…nothing… nothing…ah…there it was! But it was not the western diamondback I had expected to see on the trail in Arizona’s Tortolita Mountains; instead I was looking at a roadrunner. The loud clacking of its beak – reminiscent of the staccato clatter of castanets – was clearly a warning; perhaps I was was too near its nest. Members of the cuckoo family, both male and female roadrunners produce this clacking sound, as well as a “bark” sounding more like the cluck of a quail. The male roadrunner also makes a dovelike coo to mark its territory and call for a mate. When the roadrunner stopped clacking, I gave the agitated bird wide berth and continued hiking. 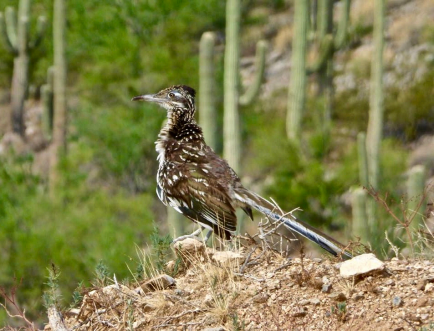 This trail northwest of Tucson is centrally located in the Greater Roadrunner’s range, spanning the American Southwest and northern Mexico. A smaller close cousin, the Lesser Roadrunner or Geococcyx velox, occupies a much smaller range in the southwest regions of Mexico and parts of Central America. It can be found at elevations from sea level to over 6,000 feet and in biomes from grasslands, to foothill woodlands, to chaparral; but it is most readily recognized as a desert dweller, and is undeniably the avian icon of the Mojave, Sonoran and Chihuahuan Deserts. The common element the roadrunner requires in any habitat is large or dense cacti, shrubs or trees. These plants provide shade and lower temperatures during the hotter months, insulation for warmth during the cooler months, protection from predators and nesting sites.

From the tip of its curved beak to the tip of its long tail, the adult roadrunner is nearly 2 feet in  length and weighs about 12 ounces. Both sexes are similar in appearance – the male just slightly  larger – with a heavily-streaked plumage of white, brown and black, a crest that can be raised or lowered at will, and a post-orbital bare streak behind its eye colored white, slate blue and orange.  Its long legs with the cuckoo’s zygodactyl toes (two toes pointing forward and two toes backward)  give this bird its distinctive X-shaped tracks, and enable it to reach speeds of over 15 MPH. True to its name, the roadrunner prefers to run, darting and dashing after prey, and flying only a few  feet high to gain perch or a few yards to quickly outdistance a predator and seek cover.

The roadrunner is an omnivore, it’s diet consisting of 90% prey – mostly small lizards and snakes.  It also consumes small rodents or birds, scorpions and insects. The other 10% of its diet is the  fruit and seeds of cacti. This diurnal predator it is most legendary for being a rattlesnake killer.  Able to digest rattlers up to 18” long, the roadrunner first approaches the snake cautiously, sizes it  up, then attacks. It will use its beak or feet to poke the snake, actually provoking it to strike. If  needed, the roadrunner evades the strike by deflecting it with its wings or quickly hopping out of  range. But more often it uses its agility, speed and powerful beak to grab the snake’s head mid strike. Once caught, it uses a whiplike motion to beat the snake repeatedly on the ground,  causing multiple spinal fractures and death, and making the meal more malleable for digestion. 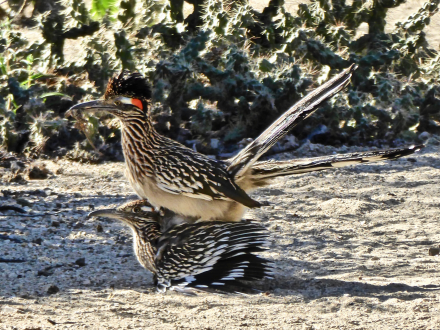 This male roadrunner holds a lizard in his beak, which he will offer to her after mating.

Like many animals, this predator is also a prey for other carnivores. Although a fortunate coyote  or bobcat may snag a roadrunner on occasion, roadrunners seldom fall prey to these mammals.  The roadrunners’ main threat are raptors, particularly Cooper’s hawks and prairie falcons.

The raptor must catch the roadrunner off-guard however, as numerous anecdotes are told of wary  and wily roadrunners taunting hawks, always evading capture, and finally tiring their foe to the  point that they actually chase it away from their nests.

If roadrunners avoid predation, they may live to be six or seven years old, and produce several  offspring during their life. The male roadrunner approaches a female in the spring of the year  with a twig in his mouth, a not-so-subtle invitation to building a nest together. Before she  approves of him as a lifelong mate, she will put him through many courtship rituals. All of these  are to test his prowess as both a provider and protector. His final approach is with a vertebrate  offering, such as a small lizard or snake. If she assents he will mount her – the tasty treat still  hanging from his beak – which he will reward her with once copulation is complete.

A second breeding season may occur in fall, depending on abundant summer rains and resulting  ample prey. In wet years two, three or even four clutches of eggs may be produced. In dry years,  no breeding may take place. Each clutch produces three to six eggs which are laid in a nest  typically located low in the thicket of a paloverde or mesquite trees or cholla cactus. Only half  of the hatchlings will survive to maturity; the remainder fall victim to starvation or predation.

Both sexes take turns incubating the nest, though he is responsible for the night shift, as she must  conserve her energy. Like all roadrunners not nesting, her body temperature drops dramatically  at night, from 103℉ to 93℉. As she sleeps her metabolism will slow and her body cools,   reducing her caloric need some 40% over her mate. In the morning she will reverse the process,  turning her back to the sun, lowering her tail and spreading her wings. She erects the feathers on her back, exposing a patch of black skin that heats her body through solar radiation. Her high  daytime body temperature is an adaptation to better cope with the ambient desert heat. 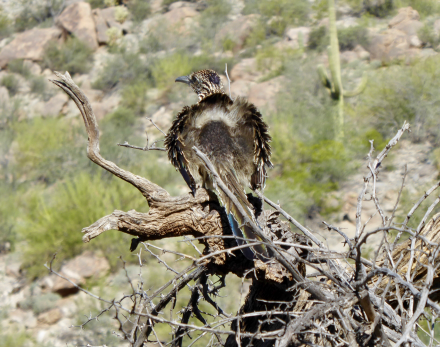 A female roadrunner exposes the black “solar panel” on her back used to warm her body.

With its amazing adaptations, amusing antics and abilities as a hunter, the roadrunner has earned the respect of all cultures, both ancient and modern. The Chemehuevi tribe of the Mojave Desert derive their name from this bird; the story is told when tribal leaders first saw the Chemehuevi Valley full of mesquite beans, they raced down to it with their “nose in the air like a roadrunner”. Cowboys told tales how the roadrunner would seek out sleeping rattlers, then build a corral of cholla cactus joints around them to entrap the hapless reptiles. Warner Brothers Studios Roadrunner cartoon has remained popular since its 1949 inception. Whether in fact, folklore or film, this icon of Northern American deserts has earned its legendary status. 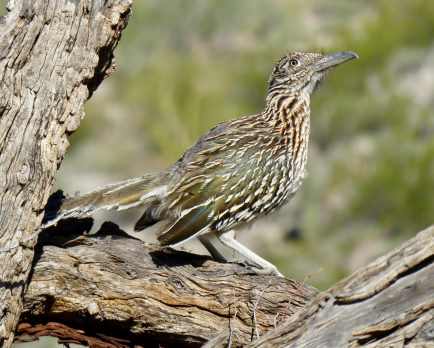 The Cornell Lab of Ornithology – All About Birds: Greater Roadrunner  http://www.allaboutbirds.org

← How to Use Naturalist Skills to Enhance your art
Volunteering in the time of Covid… what are the options? →