Now let’s examine what the Silky Pocket Mouse eats.  Like most other mice, it eats plant parts like seeds and berries. And it likes to collect the seeds and berries and take them to its burrow to store them in storage chambers for later use. But how do they get the food back to their burrow? They have pouches, or storage bags, in their cheeks to carry things in.  Some mice have cheek pouches with the opening on the inside of their mouths, but every time they open their mouths to put something in the pouch they lose a little bit of moisture into the air. But our little Silky Pocket Mouse has its cheek pouch openings on the outside of its cheeks so it doesn’t have to open its mouths to fill them and therefore doesn’t lose any water.  And if you don’t ever drink water you don’t want to lose any unnecessarily, right?
So, the little Silky Pocket Mouse never has to drink water and has external cheek pouches as ways of adapting to the harsh desert environment.  If you are out in the desert and you see 2 or 3 small holes under a cactus or shrub, you might be looking at the entrance to the burrow of a
Silky Pocket Mouse.  All entrances to the burrow lead to a central room. From this room tunnels radiate out in all directions leading to storage chambers and nesting chambers. So keep your eyes open when you are out in the desert for the tiny Silky Pocket Mouse.

The Kangaroo Rat is not really a rat, but a strange looking rodent in the same family as the pocket mouse. It has a large head, short front arms, very long back legs and feet, a long tail with fur on the end, large eyes and small ears. 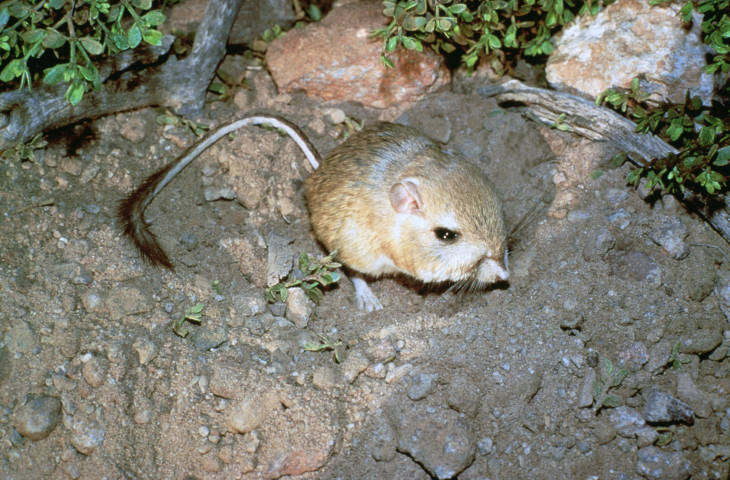 The most amazing thing about the Kangaroo Rat is it’s ability to jump up to 9’ in a singe jump! That’s all the way across a medium sized bedroom. And that’s how it got its name; it can jump like a kangaroo! And it prefers to hop to get around rather than run.

The Kangaroo Rat is 4+”; about the size of the palm of your hand, with sandy brown fur and a white belly and white markings on its face. Its long tail, 5-7”, helps to balance the rodent when it hops.

The Kangaroo Rat, like the pocket mouse, is almost perfectly adapted to the desert, and like the Silky Pocket Mouse it never has to drink water.  All the water it needs is provided in the seeds and mesquite pods that it eats. And it has those outside cheek pouches so it doesn’t have to open its mouth and lose precious moisture from inside its mouth when it fills them.

They have a maze of underground burrows that have several entrances to better escape predators. If a predator comes in one burrow, The Kangaroo Rat can escape out another.

Predators include rattlesnakes, coyotes, weasels, owls and other birds of prey, foxes and bobcats.

Kangaroo Rats have another unique quality they use on predators: they kick sand in their faces with their very long feet, or jump up and down to frighten them.

A Kangaroo Rat can live anywhere from 2-5 years.  They live alone in their burrows.

The Grasshopper Mouse is a robust little rodent of southern and western Arizona. It’s about the size of your index finger (3 1/2 – 5 inches long).  It’s small but very ferocious, as we shall learn.

Let’s start by examining what most mice eat: plant parts, like seeds and berries. But unlike other mice, the grasshopper mouse eats MEAT.  In other words, they eat other animals. So what other animals do you think the Grasshopper Mouse eats?  Judging by its name, it must eat grasshoppers. It also eats spiders, beetles, lizards and even other mice.  But, its diet consists mainly of SCORPIONS!

But how can it eat scorpions without getting stung by them? Well, the answer is it does get stung, but it’s immune to the scorpion’s venom so it doesn’t get sick.  Not only does it not get sick, it changes the venom into a pain killer for itself!

There is another unique fact about the little Grasshopper Mouse. After it kills a meal, it stands on its hind legs and howls into the night air: a very high-pitched scream. Some say it’s howling at the moon and for this reason it is sometimes called the Werewolf Mouse.

There are other interesting things about the Grasshopper Mouse besides killing scorpions and howling at the moon.  Like other mice it lives in burrows in the ground but instead of just one burrow it has four burrows: one for sleeping, one for storage, one for raising the babies, and one is a bathroom. And when a male and female Grasshopper Mouse get together to raise a family they stay together for their entire lives and raise their families together.